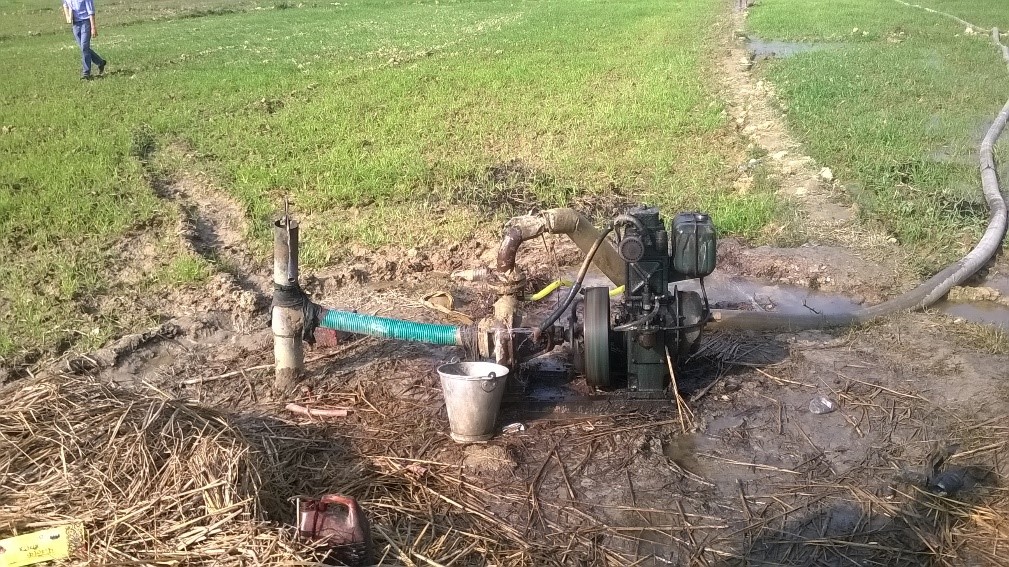 Rice-wheat cropping system dominates the agriculture in the Gangetic Plains of the North Bihar. Rice is cultivated during the kharif (monsoon) season with transplanting dates matching with onset of monsoon. Sufficient monsoon rainfall generally precludes the need of irrigation for this crop, except in the event of dry spell. Wheat, which is the main rabi (winter) crop of the region, requires at least three irrigations during the critical stages of the plant growth to make wheat cultivation profitable.

A field survey revealed that a 4 or 5 hp diesel pump set, which is most common in the region, is used to pump water from tube wells. Water is conveyed from the source to fields using either flexible polyethylene pipes or, in few cases, using field channels. Fields usually do not have intra field water distribution channels and water is delivered at the corner of the bunded field or at some point in the field, which farmer feels, will be appropriate to distribute water to entire field (flood method of irrigation). The cloddy and uneven fields in combination with closely spaced wheat stems offer lot of resistance to the waterfront, slowing down its rate of advance. During the course of the irrigation, water delivery point in the field is shifted to other desirable locations depending on the depth of the standing water and area covered by the current delivery location. Before changing the delivery point, farmer ensures that sufficient depth of water is applied at the farthest point from the present point of delivery. This eventually requires sufficiently longer irrigation events so that water reaches the farthest end, resulting in huge deep percolation loss in the vicinity of the delivery point. The deep percolation losses, combined with losses from faulty connections and punctured conveyance pipes incur an extra expenditure on irrigation.

Ground water is the major source for wheat irrigation and farmers are purchasing it at the rate of Rs. 120 per hour. Farmers informed that it takes about 10 to 12 hrs for a 5 hp diesel pump to irrigate an acre of a wheat field. Many farmers afford only two to three irrigations for a wheat crop and pay Rs. 2400 to 3600 to the tube well owner. Interviewed farmers reported an average wheat yield of 10 quintal per acre which provides a gross return of about Rs. 10000 per acre. This indicates that irrigation takes away 24 to 36 % of the gross return depending on the number of irrigations applied. It is important to reduce the water losses and consequently the expenditure on irrigation so that farmers can afford more number of irrigations and get improved wheat yields. Adoption of efficient irrigation systems like ‘sprinkler irrigation’ can help in achieving these twin objectives. Apart from reduced deep percolation losses and uniform water application, sprinkler system offers better control over the available water flow. Farmers, mostly tenants and women farmers cultivating the wheat crops in the region, need to be informed about the sprinkler irrigation systems. It’s the high time that we demonstrate the applicability and potential of sprinkler irrigation for wheat cultivation.