The DSI4MTF project will receive valuable information from another project “Assessment of water resources and sustainable irrigation potential in nine districts within the Eastern Gangetic Plains” which is being undertaken by IWMI. The project is at its mid-point and is focussed on nine districts including those of interest to DSI4MTF.

Provisional results of areal study of surface ponds indicate that the districts under study contain over 18500ha and 9000 ha of permanent and temporary ponds with average dry season depths of 4m for the permanent ponds. These results suggest a potential of at least 740MCM of available surface water storages.

Groundwater potential shows pre- to post monsoonal variations in shallow aquifer storages of 0.3 to 0.6% at the current withdrawal rates. With dry season groundwater tables generally in the range of 3 – 6m, the underutilized groundwater aquifer storage of 5 – 2m exists that can be tapped with installation of shallow tube wells.

Detailed information on groundwater and surface water resources, crop irrigation requirements and irrigation infrastructure will be collected as part of the DSI4MTF project starting February 2015 and will be informed by the district scale data being collected by Dr Okwany and the IWMI team. 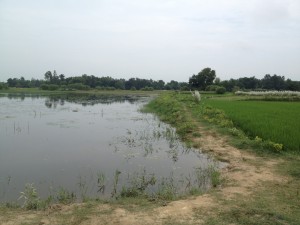