Training on ‘maintenance of Drip and Sprinkler systems’ conducted at Bhagwatipur

With the introduction of interventions on solar pumping, drip and sprinkler irrigation, the agricultural production systems in the project villages are getting intensified. New crops are introduced,  better irrigation schedules are adopted,  improved cultivation practices like raised bed with polythene mulch are practiced. However, the major challenge for the farmers was to maintain the drip and sprinkler irrigation system which they were experimenting for the first time in their life. It was important to train them on this aspect.

A training programme on operation and maintenance of the drip and sprinkler systems was conducted for the participating farmers, mostly women.  Initial discussions focued on cleanliness of the water sources like pond and tube well. Cleaning of filter screen (mesh) was first explained with live demonstrations and then tried by individual farmers of each collective. Flushing of sub main lines and laterals was discussed and demonstrated. In general, emitter clogging is major issue with drip system. Framers were trained on how to clean the choked emitters using simple tools and techniques.  The chemical treatments for biological (moss, algae, roots) and chemical (salt deposits) clogging of emitters were discussed in detail. Farmers were informed about the practices to prevent damage to system parts during field operations. Practices and availability of chemicals for safe gaurding the laterals from rats and rodents were also discussed. Finally, a live demonstration was conducted on how to fold, collect and store the laterals at a safe place during the off season. It was a very interactive training in which farmers asked several questions which were answered and discussed in detail. 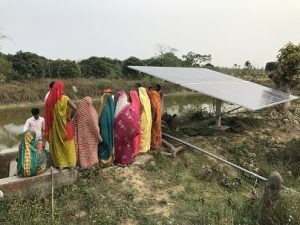 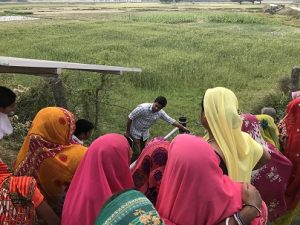 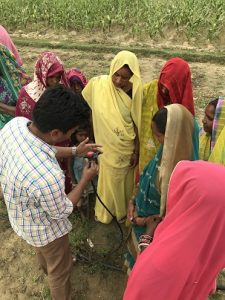