This case study describes the transition from individual farming to cooperative farming that has taken place as a result of a project funded by the Australian Centre for International Agricultural Research (ACIAR).

Bhagwatipur village is located in Andhrathari block of Madhubani district, Bihar, India. This village is inhabited by a majority of the economically and socially deprived people. Landholding pattern is unequal, with the majority of the landholding in the hands of a few people including both existing and absentee landlords. Actual farmers are dependent on the landlord to rent the land for agriculture. The landlord used to give land on Batiya (sharing) basis in which the tenant provided half of the produce to the landlord. All the investment in the farm would be borne by the tenant and the landlord would not invest anything for the improvement of land or production of the crop. The terms of lease of land to the farmer is entirely dependent on the wishes of the landlord.

Sakhi started the project interventions with the support of IWMI. The project is based on maximising the crop cultivation during dry season by judicious use of water. The intervention site was identified based on the availability and suitability of the land for the project and farmers. The major focus is on marginal and tenant farmers. The process started with informal meetings with the farmers and later one group was formed comprising eight members from Bhagwatipur village. All the group members are marginal farmers having very small landholding.

At the beginning of the intervention all these farmers showed their interest for dry season agriculture as most of the land remains fallow during this period. The majority of the farmers don’t have the knowledge of using residual soil moisture for the dry season crop. In the group meeting there were discussions on different cropping options during dry season. All the farmers showed their interest for vegetable crops. During that time, none of the farmers agreed to go for cooperative farming. They wanted to try the suitability of the intervention in their land individually. We supported them by providing good quality seed and techniques of vegetable cultivation. The area of vegetable crop of each farmer is up to 2 Katta of land. They started cultivation of Okra, Cowpea and some cucurbitaceous crops.

Farmers were sensitised by organising visits to the sites of other groups within the village where they got the chance to learn the details of collective farming being practiced and the benefit from collective farming. The scale of production and sharing of labour/output encouraged the members to go for the vegetable cultivation collectively.

Shift from individual to collective farming

Initially farmers used additional production for home consumption. As production has expanded they have started selling to the local market. One of the progressive farmers, namely, Mr Jugat Yadaw earned more than Rs 9000 from vegetable crops in his 2 Katta of land. This generated interest in the group for vegetable farming. In group meetings they started discussing vegetable farming, the advantages and that it is labour intensive and requires more inputs than a cereal crop. They also understand that vegetable farming could give many times more profit than cereal crop farming. In one meeting all group members confirmed they will go for vegetable farming during the dry season in a cooperative model, similar to that being practiced by farmers in group no-1. They also agreed that all farmers of the group would allocate some of their land for cooperative farming. They have agreed to pay 20 Kg wheat and 20 Kg paddy for each katha. 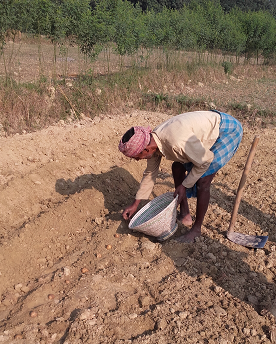