By Raj Kumar and Rabindra Karki

Technical, social and economic constraints are limiting the effective use of groundwater and ponds for irrigation in many parts of the EGP due to which large areas of land remain fallow during the dry months. Therefore, access to year-round water for irrigation would significantly improve the productivity of agriculture, improving incomes and food security.

Marginal and tenant farmers, youth and women are particularly vulnerable and could benefit from a new approach to irrigation provision. This project aims to research and demonstrate improved collective farming systems for marginal farmers and improved water management and irrigation practices using efficient systems appropriate to the needs of the marginal farmer communities.

Koiladi is a village in Koiladi VDC located at the southern part of Saptari District. The village is located at a distance of 13 kilometres from Rajbiraj, the district headquarters. People from various ethnicities such as mandal, singh, dalit, muslim reside in the village. Majority of the land in the community belongs to landlords who are from Singh caste while others hold very limited land many of whom are tenants.

There are two Koshi branch canals which flow from east and west sides of the village. These seasonal canals provide suffice water for paddy during monsoon but run dry rest of the year except during winter when it is opened once for cultivation of wheat crop.

In Koiladi, households from different ethnic groups from the community integrated into a farmer group named “Shiva Parbati Farmer Group”. The project has facilitated and coordinated the seven-member group and also helped them lease 1 Ha of land for two years from Rajesh Prasad Singh, a local landlord through a formal written agreement with the landlord.  The major crops grown by the farmers are rice, corn, ladies finger, legumes and other vegetables.  For use of the leased lands, the farmers in return pay 560kgs of paddy for 6,772sqm of land per year or this can also be paid in monetary value equivalent to the amount of paddy. 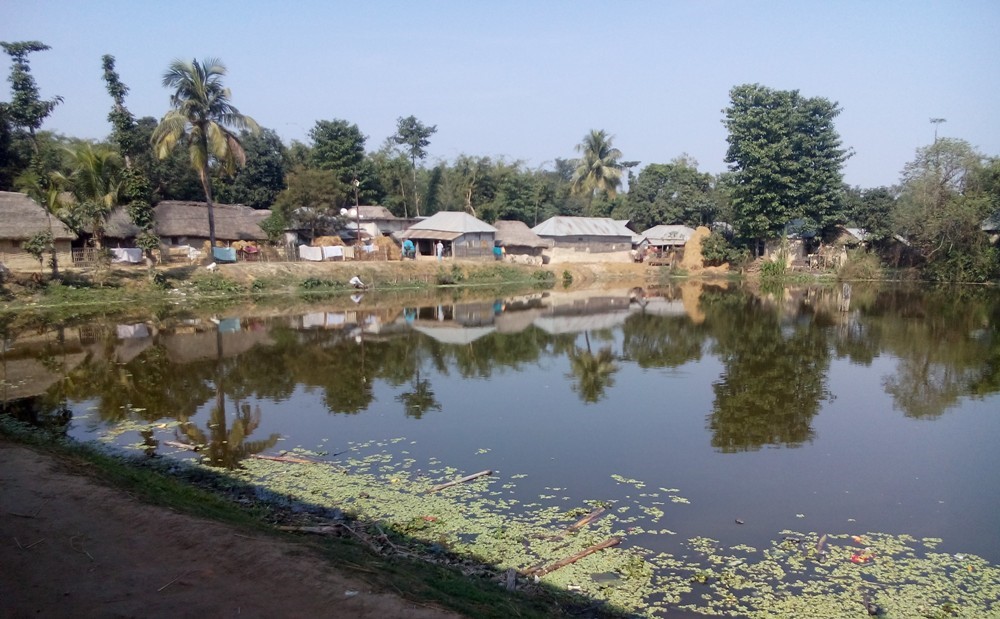 The Project has also supported the group with a 2 HP electric pump installed in four-inch diameter shallow tube well. The pump has been safely housed in a brick masonry pump house. The pump has a capacity of 8 lps field discharge. In addition to this, the project also provides training on nursery raising, use of micro irrigation technology, soil solarisation, Integrated Pest Management (IPM) and record keeping. The project also hosted a visit of the farmer group to Madhubani, India where the farmers had an opportunity to learn about the project and also interact with the Madhubani farmers to better understand the process of collective farming model. Subsequently, we found that Koiladi farmers were encouraged to grow rice collectively following this session. Prior to the visit, the farmers were unwilling to farm collectively because of the difficulty in equal labour contributions, collective working and lack of trust regarding collective working.

The group has been facilitated with the conjunctive use of groundwater developed by the project and surface water developed by the Department of Irrigation (DoI). This is the most economical option since it optimises the water demand/supply balance. This irrigation method also controls water- logging and salinisation and improves crop health and productivity.

The results obtained from soil testing conducted on the group’s land (soil testing being done in the government’s soil laboratory) showed that the soil was suitable for all types of crops cultivated in the fields. This has further encouraged the farmers to focus on improving agricultural production. Additionally, the group has also developed a crop calendar with the support of project agricultural experts. The group has developed its capacity to maintain the records of their saving and credits, agricultural input and income, expenses and crop yield records. It is up to the village based project social mobiliser to train the group in record keeping.

With facilitates obtained from project intervention, the farmers have also approached the District Agriculture Development Office (DADO) for further agricultural trainings and support.

The major impact of the project intervention is the availability of water all year-round. Water from Koshi branch canal alone would be suffice for paddy and one-time irrigation of wheat in winter season but now the shallow tube with electric pump has been providing sufficient water for irrigation for all of the leased land. The group has been encouraged to mix the ground water and surface water for irrigating the land whenever possible. After the project intervention, farmers have grown bitter gourds, sponge gourd, bottle gourd, pumpkin, maize and mug in their lands. The farmers have developed a year-round cultivation plan including cultivation during the dry season. Currently, the farmers are preparing their lands for paddy and plan to grow cauliflower, cabbage and potato followed by cucumber, sponge gourd, bitter gourd, pumpkin and bottle gourd. With this cropping pattern, the whole leased plots of lands will remain cultivated all year round.

Prior to the project majority of the group members, especially women, were hesitant to speak up freely with anyone outside the village and were never a part of any decision making neither at home nor at their farm interventions. One of the key impacts is that the farmers are gradually developing their leadership capacity and beginning to understand the project approach.