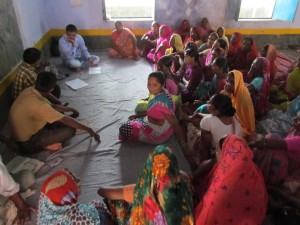 by Fraser Sugden and Anoj Kumar

On the 22nd of September, Anoj Kumar and Fraser Sugden visited the farmer collectives set up by   Pragiti Grameen Vikas Samiti (PGVS) in Sahar of Bhojpur district, Bihar. The purpose was to understand the potential for collective farming as a solution for improved productivity for marginal and tenant farmers in the Eastern Ganges Basin. PGVS has set up 149 farming groups, out of which 62 are collectives, across rural Bihar, mobilizing groups of landless women to take joint leases of land and share inputs, labour and outputs. This is a model similar to that which is proposed in our ACIAR project sites in Madhubani, Saptari and Cooch Behar.

We are very grateful for the support of PGVS for organizing the visit.

Each collective has taken a joint lease for around 1 bigha of land (0.25ha). All members are landless, although some members also lease land outside of the group.

The lease is done without a formal written agreement,, and the collective pays Rs14,000 per month

Credit for production and accessing inputs

A key foundation of the collective was a savings scheme, whereby members of the groups deposit Rs10 per month (some groups give more, depending on their size). The money collected is used to purchase inputs and pay the rents. Inputs include fertilizer, and use of a tractor for ploughing – which costs Rs700 per bigha.

In the past subsidies were denied to individual farmers from the Block Agricultural Office as to avail the service farmers had to furnish their land ownership or tenancy certificate. The collective was now registered as a women farmers group at the district ATMA office, which will offer them access to subsidies, fertilizer and improved seeds, and technical advice. This right was achieved after collective mobilization by members. Farmers who are members of the collective can now avail subsidized inputs even for their privately rented holdings.

While the joint savings were used to purchase inputs, labour was entirely shared amongst the group. There were no reported conflicts over the number of days members had contributed. Through peer pressure alone, it was possible to ensure that all participants contributed equally. There is a mutual understanding, so if one member cannot participate due to illness, no compensation needs to be paid. Farmers typically work for half the day on the collective land, and half the day on their own privately rented fields. On average they spend 15 days a season working for the collective.

All crop outputs are shared at the end of the harvest.

To full seasons of crops are cultivated. Paddy is cultivated during the monsoon, followed by wheat and vegetables during winter. Fortunately this region has access to canal irrigation, so investment in groundwater is not necessary.

The collectives are women run, and the members of the production team are all women. However, husbands or male family members do also provide labour from time to time. Some ‘male’ tasks such as ploughing are done by tractor, for which the group uses its savings to pay.

Each group has a president, chairperson and treasurer

You are currently browsing the DSI4MTF blog archives for October, 2015.